I’m not crazy. My reality is just different than yours 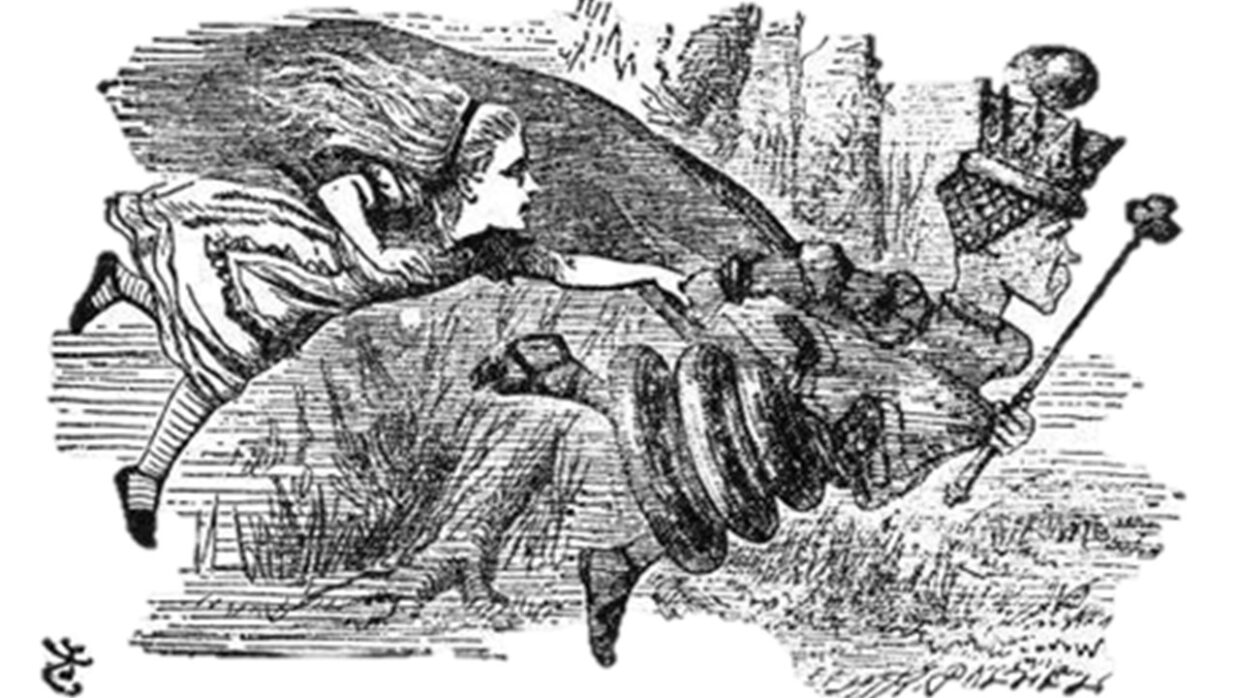 In the Red Queen’s race Alice is constantly running but remains on the same spot.

Well, in our country, you’d generally get to somewhere else—if you run very fast for a long time, as we’ve been doing.

A slow sort of country! Now, here, you see, it takes all the running you can do, to keep in the same place. If you want to get somewhere else, you must run at least twice as fast as that!

The Red Queen hypothesis[1] was proposed in the 1970s to describe how species have to constantly adapt, evolve, and proliferate in order to survive against ever-evolving competing species[2].  Ever since, businesses and government organisations have used this metaphor to describe the struggle to stay ahead of the game and the competition. It’s a well-rehearsed theme, particularly in Defence[3], and its symptoms and effects are widely recognised, so why is nobody really escaping the treadmill?

At the individual level we can adapt to, or work around, changes that directly impact us – embracing or eschewing technology, accepting or denying change, going with the flow or being the island in the stream.

This freedom to choose is our right.  But Governments and large organisations do not have a choice – adaptation is the only way to succeed. Adaptation is the only way to assure the security, welfare and safety of citizens and employees.  But with the pace of change accelerating beyond our ability to predict it, and the rate of adaptation needed far outstripping the capability of government and big organisations (and with most being too large and complex to be truly agile), what is the right balance of prediction and adaptation to secure their future strategic advantage?  And how, in the light of such unprecedented change, can good investment decisions be made to assure the resilience and effectiveness of capability in the long term? How does Defence escape from the Red Queen race, stop sprinting to stay still and accelerate for advantage?

Prediction is not enough:

Futures prediction has long been an established practise for government and industry; in order to be prepared, to mitigate risk and shock and to be poised to take advantage of opportunities, it is essential that we have an idea of what might be coming at us and how it may impact. But, although many future trends are well-rehearsed and are following a ‘predictable’ (if not desired) course: environmental change, technological development, increasing globalisation to name but a few, what has really affected our ability to adapt is the sheer pace of change that is happening to and around us. This speed of change negates good work done in capability planning and has contributed to enduring issues in developing and delivering complex and interconnected capabilities such as Command and Control, logistics and, more recently, cyber; when the right answer is found, by the time the solution is planned, acquired and implemented, the question has changed. And, even when we predict well, for example: a pandemic has been part of risk calculations for over 10 years5; GST has had 6 editions – each one building on the forecasts of its predecessor; the digital revolution was long hailed before it was commercially viable;– decision-makers still appear to be pretty unprepared for the manifestation of the problem (or opportunity). In order to be truly prepared to adapt, we need properly to consider the ‘what-ifs’ and high impact/low probability events, experiment to understand outcomes, unintended consequences and gamechangers, and have the capability to implement rapid change.

We think prediction should start with research and end with a specific plan to change and poise for effect.

In undertaking horizon scanning, technology watch and trends analysis, the consideration is mainly on how external factors and influences will impact on an organisation’s internal functions, planning and capabilities. Too often, the basic assumptions underpinning these functions, planning and capabilities are not considered and therefore the full impact of the event is not understood. As many of these assumptions are implicit, decision-makers can be unaware of their effect; and explicitly stated assumptions can be protected as sacred cows, rather than challenged, as they set the baseline for key decisions. However, technological advancements, a changing global context and the pace of change are undermining many core, sometimes unstated, planning assumptions such as:

…and there are many others that shape our decision space and influence our chances of success.

We should identify, reassess and reset key and implicit assumptions to set a more robust baseline for change and better enable agility.

Don’t get distracted by silver bullets:

There are many predictions for future important capabilities needed to give us an advantage, but by the time we get them right will they still be relevant? These important abilities tend to achieve buzzword status, but a clever title alone will not fix fundamental issues —artificial intelligence, machine learning, autonomous systems, distributed networking, advanced manufacturing, information advantage, and other emerging capabilities’ names are wielded as potential panaceas to intractable Defence problems, but without rapid engagement, proper understanding and disruptive capability development, they will fall short of expectations. We will, no doubt, achieve a capability, but we will not solve the problem. Similarly, enduring issues and challenges tend to be repackaged as fresh thinking with new names and labels: think of Hybrid, Asymmetric, Ambiguous, Grey Zone, Sub-Threshold warfare… all describing similar issues but never really achieving a solution. Labelitis (the art of strategic capitalisation to make a name even more clever) threatens the ability to really address the problem or achieve effect.

We think the focus should be on what needs to be done, what needs to be solved and how to fundamentally address it, with people, doctrine, training, development as well as equipment, rather than thinking up a clever way to describe it and forgetting the detail.

Continuous adaptation, rather than cyclical planning:

On the whole, Defence makes monolithic capability decisions in 5-10-year planning cycles. As a result, many of the traditional decision support tools have been built to deliver cyclical rather than continuous, iterative outputs. These tools and methods tend to be based on mostly qualitative data and have relied on relatively heuristic methods of analysis due to their high-level nature and the scope of the issues they are assessing; this means that they are costly and cumbersome, require significant resources to deliver and can be easily derailed by vagaries of planning introduced by changes to leadership, political decision making and operational urgency. A five-year cycle just cannot deliver the agility and flexibility needed to enable rapid adoption of new technology and adaptation of capability in today’s development context.

We see the need for a continuous assessment approach to quantifying, testing and evaluating strategies and concepts at the strategic and capability level.

Exploit Individual and Small-Medium Enterprise (SME) -based thinking and agility

to overcome collective and corporate stasis. Current predictions state that the future will be dominated by higher numbers of smaller or cheaper, more autonomous, more intelligent military systems, and Defence is already seeking to overcome some of the challenges of achieving rapid development against departmental inertia using innovative approaches such as Prototype Warfare. And this can be only be a good thing. However, the supply landscape needs more individuals and highly adaptable SMEs whose participation in and contribution to Defence transformation, capability disruption and experimentation could be game-changing. While there has long been a target and aspiration for widescale SME participation in Defence innovation and development, we are sometimes finding that we are the ‘token’ small partner for a large organisation to make up the SME numbers, rather than being truly valued for our capability. We also find that partnering with a larger Defence supplier can slow our own innovative approach, adding process, increasing overheads and extending timelines (because this is how they have to work as big organisations). This is not true of all those with whom we work – we are seeing a change in Customer expectations and the approach of some partners, but this change needs to be accelerated so that innovation can be truly innovative, agility can be properly agile and rapid development to meet the pace of change is achieved.

We should work across our combined strengths to achieve rapid transformation: large organisations provide resilience, capacity and stability; SMEs are nimble, adaptable and agile, and we are ready to step up to challenge and change the status quo.

We have been deliberately provocative in this piece, because now, more than ever, we need to take a more radical approach to winning the Red Queen Race – the pace is increasing, and we are already struggling to stand still.  In MOD terms, the sort of agility needed to truly compete may feel impossible, but in the words of the Red Queen herself …

Why, sometimes I’ve believed as many as six impossible things before breakfast.

At Cervus, we believe it can be done. 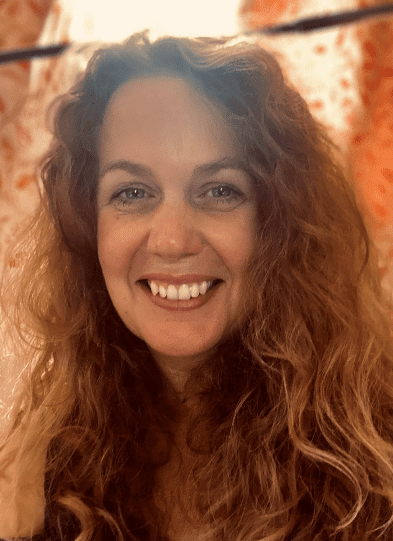 Amanda has over 20 years’ experience in leading Strategic Experimentation and Advisory Programmes, both within government and as part of industry.

She started her journey as an engineering apprentice within the MoD, then shifted her attention to Force Development and Capability Studies at Dstl. She then was promoted to Assistant Head of Development and Research at the MoD’s Development, Concepts and Doctrine Centre (DCDC). For over 5 years she led a multi-disciplined team which delivered research, analysis and experimentation to support the development of doctrine, concepts, policy and strategy.  She then spent the last 8 years working for QinetiQ, making the transition to wider government and international programmes and complex decision services. Amanda is now our Chief Scientific Officer, and is enabling Cervus to be at the forefront of innovative and transformative science for problem solving, prototyping, experimentation and data analytics for Defence, Security and other highly regulated and complex industries.

[3] UK MOD recently released their Science and Technology Strategy[3] which opens “These are uncertain and turbulent times. The world of today is hugely changed from just five years ago, and the pace of change continues to accelerate. New sciences are emerging, new technologies are being developed and adopted faster than ever and new analysis techniques are generating swifter understanding from increasing volumes of data. Science and technology (S&T) are themselves theatres of strategic competition, with new competitors challenging the establish